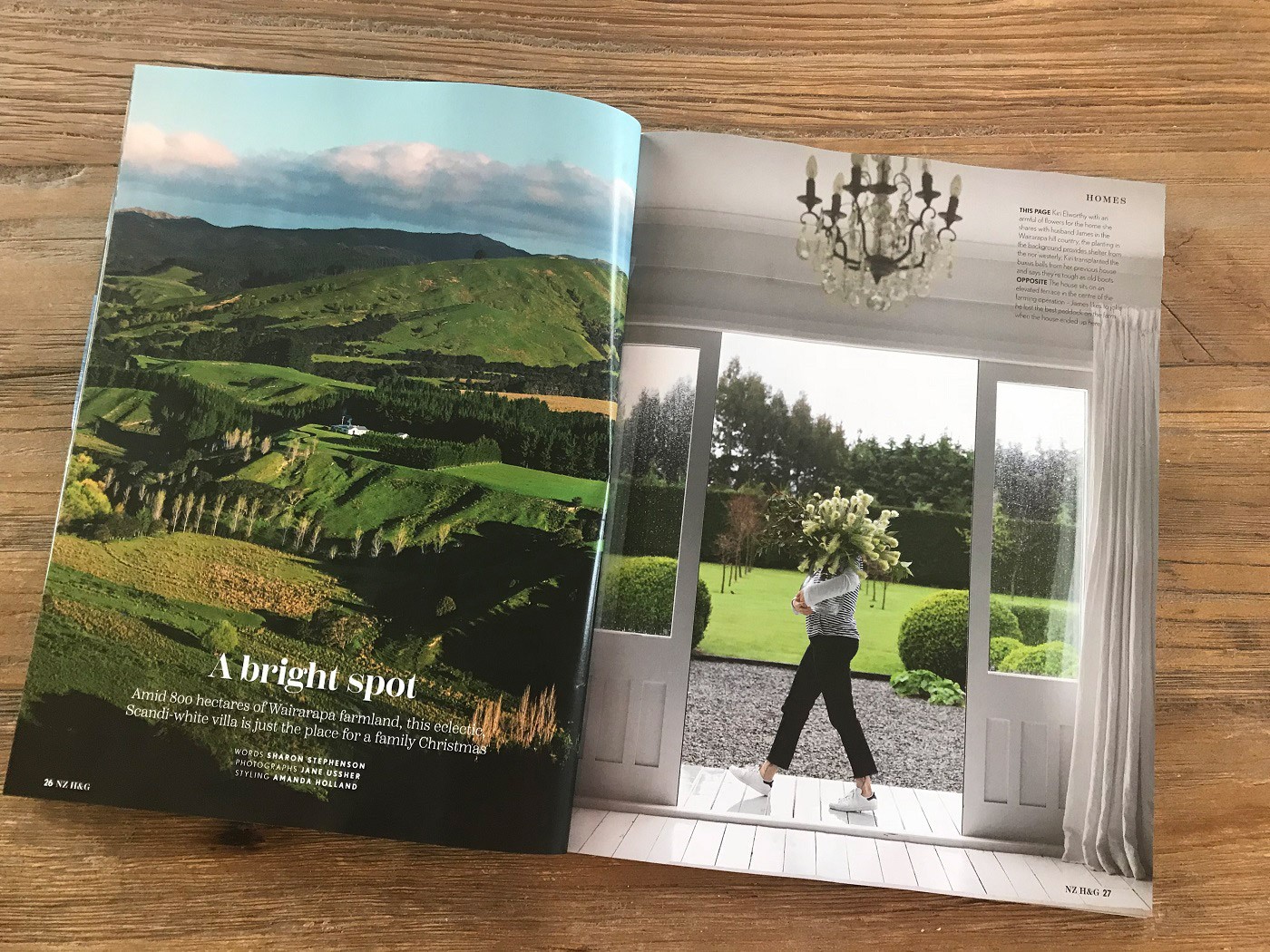 A Glimpse Behind the Scenes 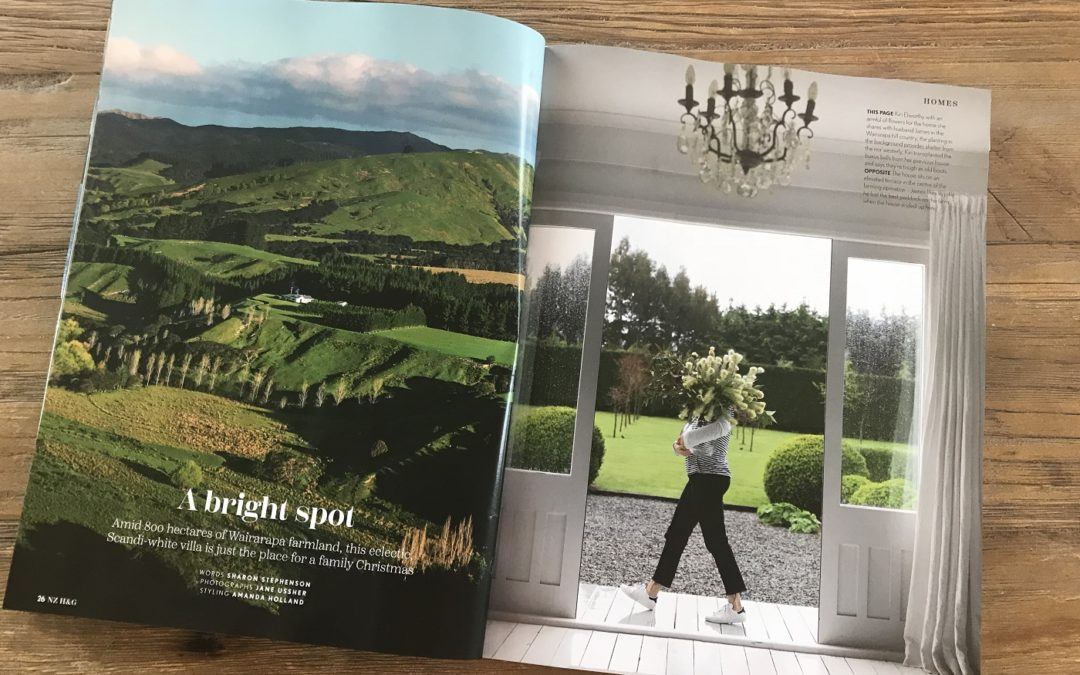 If you have been on the Tora Coastal Walk, then you will have no doubt had the pleasure of being hosted by Kiri Elworthy. In the latest NZ House and Garden magazine, Sharon Stephenson visited Kiri and James Elworthy in their home. Sharon takes you on a tour behind the scenes of their Tora home as Kiri prepares for their family Christmas. Read the full article below, or visit this link to view it online where there is an accompanying video. Enjoy 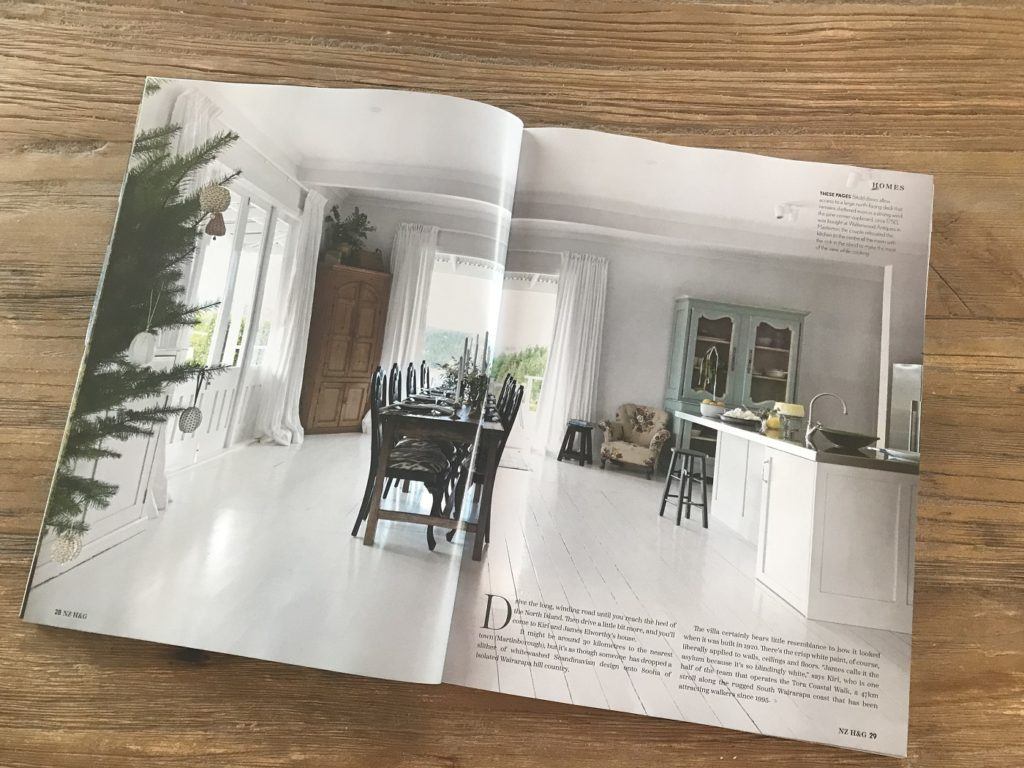 Drive the long, winding road until you reach the heel of the North Island. Then drive a little bit more, and you’ll come to Kiri and James Elworthy’s house.

It might be around 30 kilometres to the nearest town (Martinborough), but it’s as though someone  has dropped a slither of whitewashed Scandinavian design onto 800ha of isolated Wairarapa hill country. 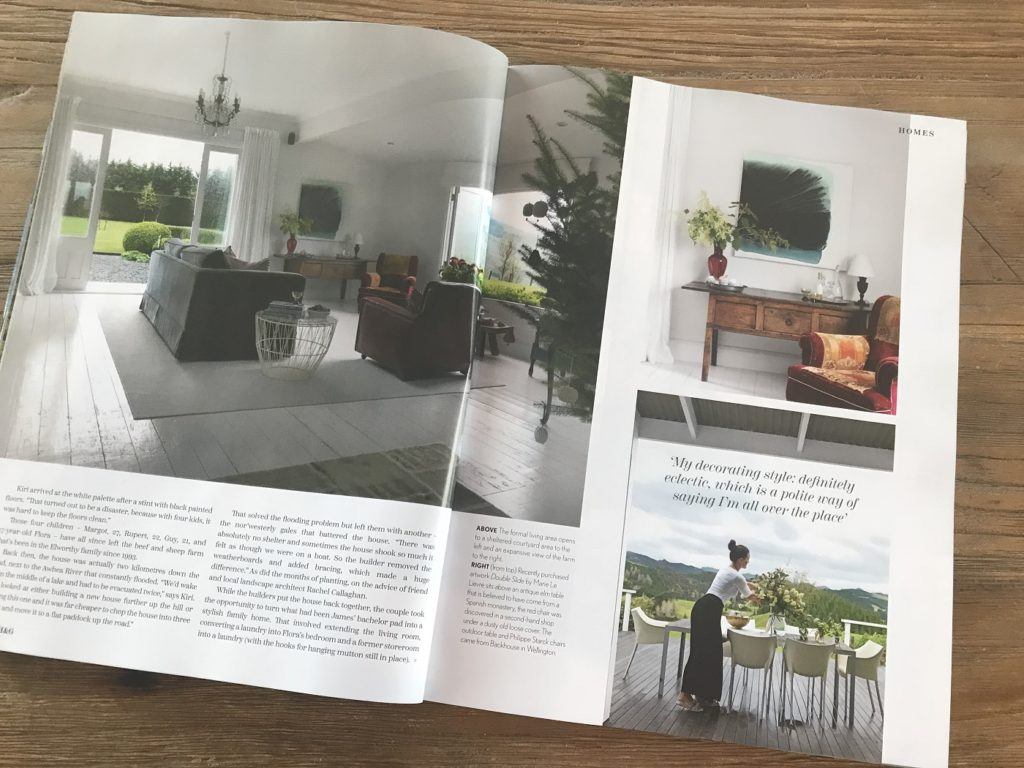 The villa certainly bears little resemblance to how it looked when it was built in 1920. There’s the crisp white paint, of course, liberally applied to walls, ceilings and floors. “James calls it the asylum because it’s so blindingly white,” says Kiri, who is one half of the team that operates the Tora Coastal Walk, a 47km stroll along the rugged South Wairarapa coast that has been attracting walkers since 1995.

Kiri arrived at the white palette after a stint with black painted floors. “That turned out to be a disaster, because with four kids, it was hard to keep the floors clean.” 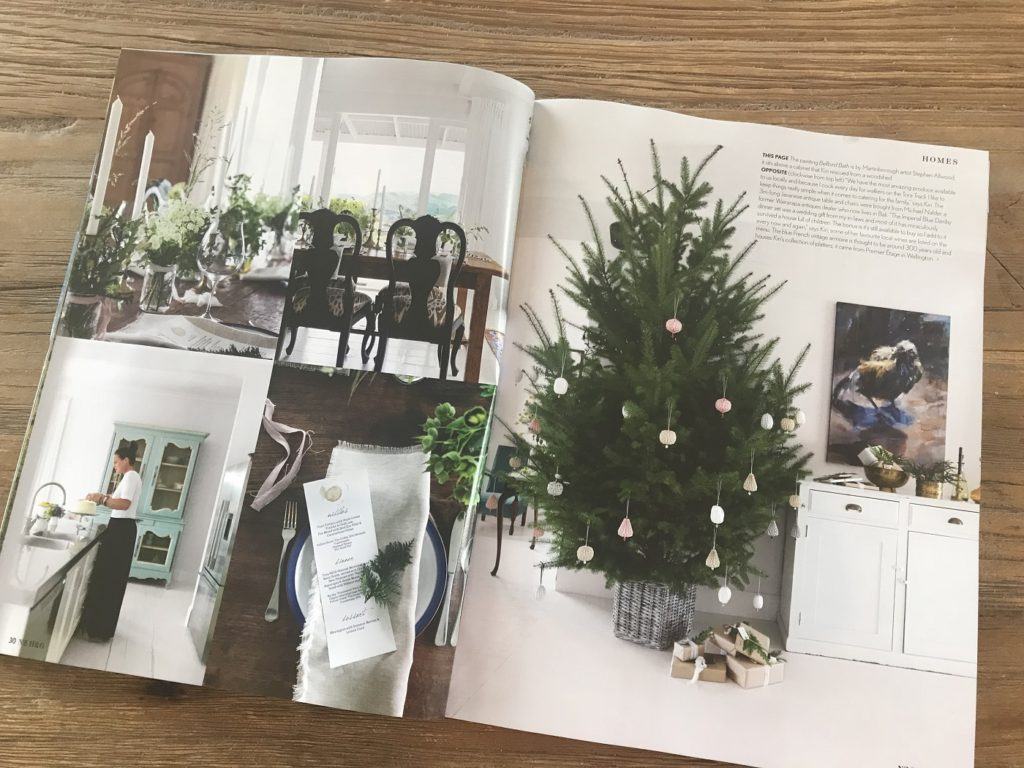 Back then, the house was actually two kilometres down the road, next to the Awhea River that constantly flooded. “We’d wake up in the middle of a lake and had to be evacuated twice,” says Kiri. “We looked at either building a new house further up the hill or moving this one and it was far cheaper to chop the house into three pieces and move it to a flat paddock up the road.” 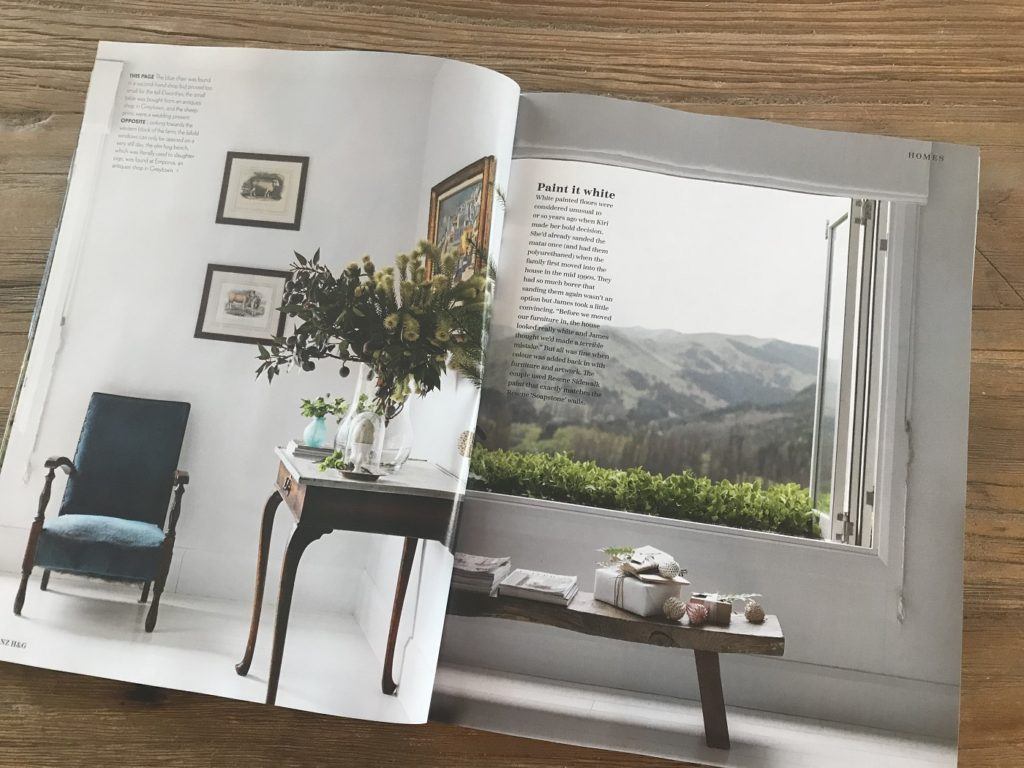 That solved the flooding problem but left them with another – the nor’westerly gales that battered the house. “There was absolutely no shelter and sometimes the house shook so much it felt as though we were on a boat. So the builder removed the weatherboards and added bracing, which made a huge difference.” As did the months of planting, on the advice of friend and local landscape architect Rachel Callaghan. 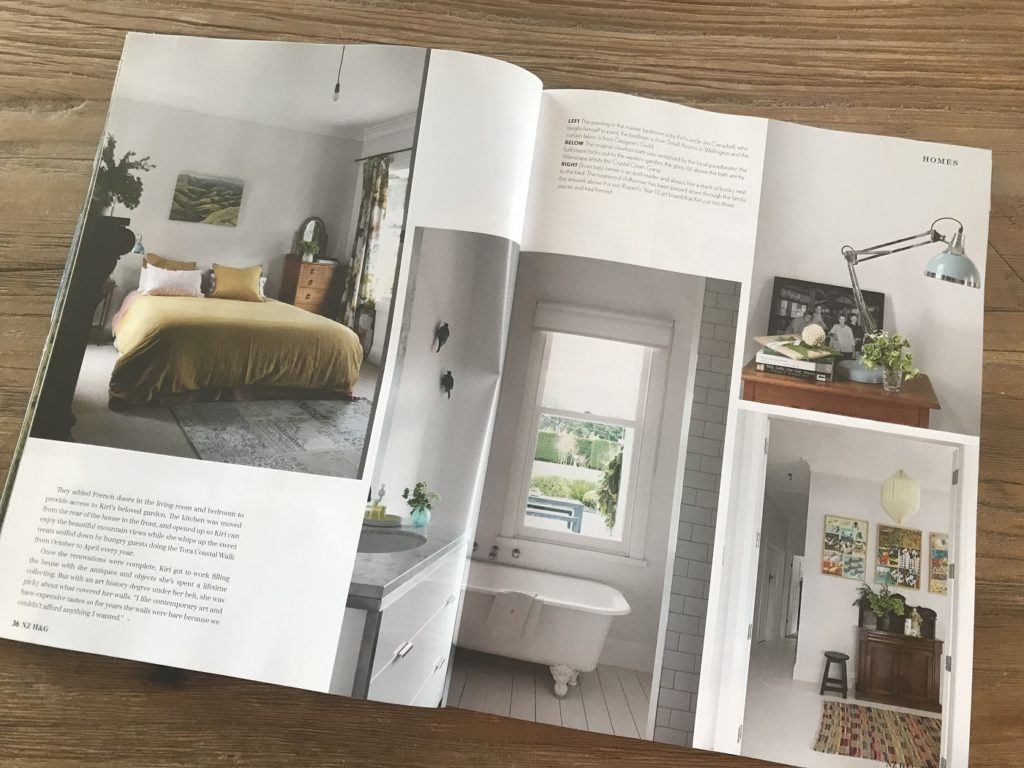 While the builders put the house back together, the couple took the opportunity to turn what had been James’ bachelor pad into a stylish family home. That involved extending the living room, converting a laundry into Flora’s bedroom and a former storeroom into a laundry (with the hooks for hanging mutton still in place).

They added French doors in the living room and bedroom to provide access to Kiri’s beloved garden. The kitchen was moved from the rear of the house to the front, and opened up so Kiri can enjoy the beautiful mountain views while she whips up the sweet treats wolfed down by hungry guests doing the Tora Coastal Walk from October to April every year. 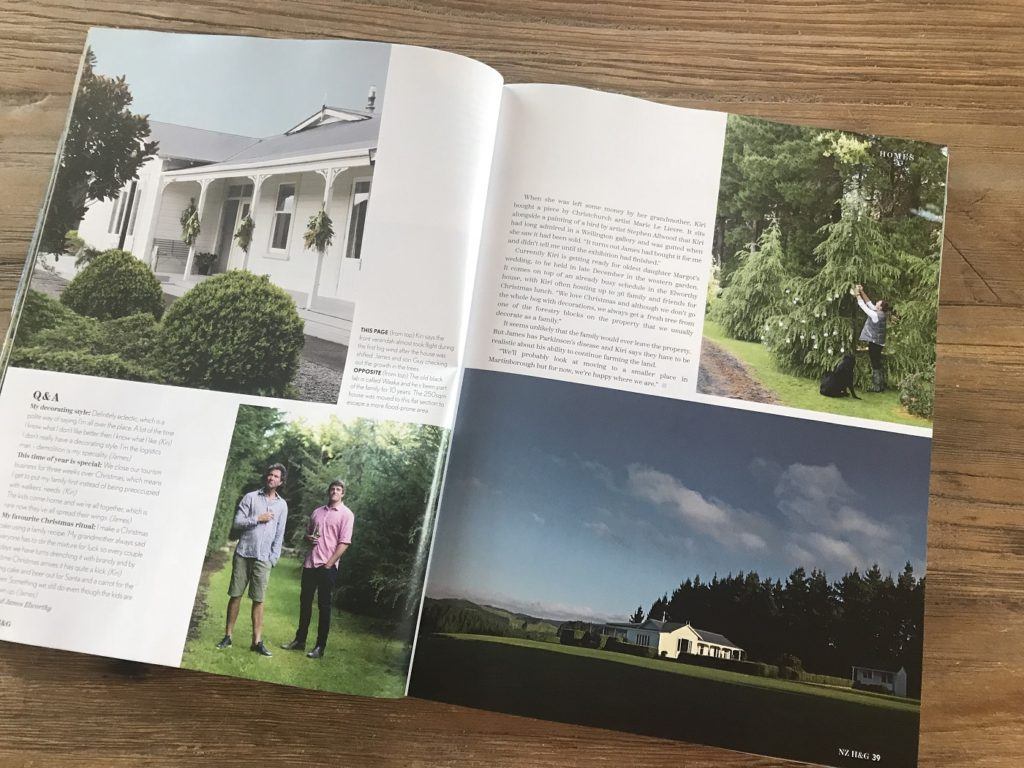 Once the renovations were complete, Kiri got to work filling the house with the antiques and objects she’s spent a lifetime collecting. But with an art history degree under her belt, she was picky about what covered her walls. “I like contemporary art and have expensive tastes so for years the walls were bare because we couldn’t afford anything I wanted.”

When she was left some money by her grandmother, Kiri bought a piece by Christchurch artist Marie Le Lievre. It sits alongside a painting of a bird by artist Stephen Allwood that Kiri had long admired in a Wellington gallery and was gutted when she saw it had been sold. “It turns out James had bought it for me and didn’t tell me until the exhibition had finished.” 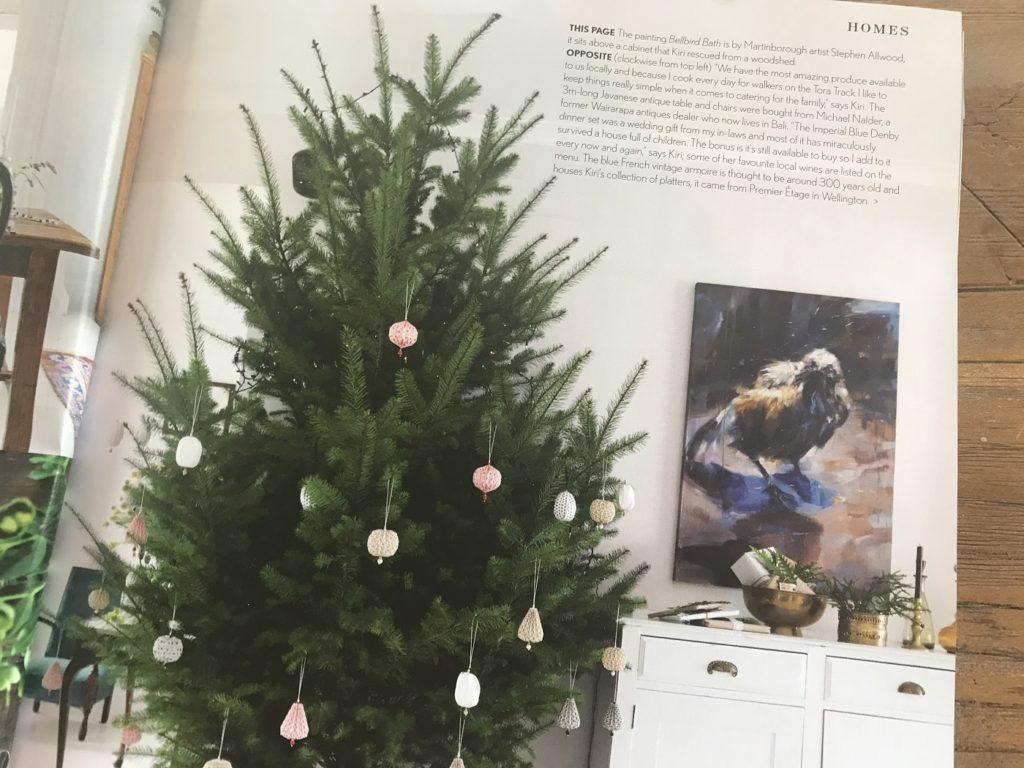 The end of the year is a busy time in the Elworthy house, with Kiri often hosting up to 36 family and friends for Christmas lunch. “We love Christmas and although we don’t go the whole hog with decorations, we always get a  fresh tree from one of the forestry blocks on the property that we usually decorate as a family.”

It seems unlikely that the family would ever leave the property. But James has Parkinson’s disease and Kiri says they have to be realistic about his ability to continue farming the land.

“We’ll probably look at moving to a smaller place in Martinborough but for now, we’re happy where we are.”

Stay in the loop

Be the first to know about the latest news and special events, plus the occasional recipe!

We respect your privacy and we will only contact you when we have something interesting to say.